Even the Tough Jews Can Be Women 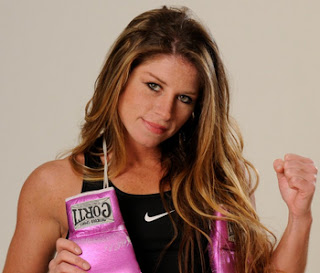 As IMPACT-Jewish Boxers in America evolves along the way as a documentary expose, I can be "WOWED!" by the diversity of Jewish boxers that have now been including women in the mix of athletes.  Argentinian Carolina Raquel Duer, 33, has just come to our attention as a leading woman Jewish boxer with a record of 12-3 in her circle of athletes.  She's the first Jewish woman to reach this level.  This stunningly beautiful and tough woman fighter opens the door to a whole new perspective in the sport of Jewish boxing by showing that women can be just as tough as the men.  She's being promoted as being just as tough as Dimitry Salita and Yuri Forman and if things continue as successfully as she's progressing, we just might see her in New York training at Gleason's Gym in no time.  Look, if the Isrealie's can boast about having women in the military for decades, as it's mandatory for them to serve alongside men, then why can't we accept and promote the fact that women have just as much right to fight in this sport alongside them?  It's something that many classic Jewish boxers of yesterday tend to cringe about but must soon learn that it's not just a man's world anymore when it comes to Jewish boxers in the ring.  Duer displays a Star of David on her trunks as well when she fights and together, both as men box alongside women, the sport is expanding into areas that break down old stereotypes about what sex can be found in the ring and who will be triumphant when it comes to the sport of Jewish boxers.  Raise a glass for the women who deserve just as much praise as the men and are fearless when it comes to boxing as well.  It's a battle of the sexes that won't just carry on inside the ring.  Women Jewish boxers are becoming their own Macabe's as well.  Duer even touts the fact that she beat up a man in her home of Argentina that tried to rip off her purse.  You can bet that it won't happen again.  You go girl!!  Carolina Raquel Duer has Moxy!!....Stay tuned....IMPACT-Jewish Boxers in America.   www.impactthefilm.com