IMPACT:
Jewish Boxers in America
FOR IMMEDIATE RELEASE:  February 18th, 2012:  Galileo Productions, LLC continues it’s tradition of award winning films by announcing the continued production of IMPACT: Jewish Boxers in America.  The project spearheads over 2 years of research into the topic and profiles current Jewish Boxing greats that include, Dmitry Salita, Cletis Seldin, Ron Lipton and Ed Gersh while also giving viewers insight into many of the great Jewish boxers of the past.  GALILEO PRODUCTIONS has spent the past several months shooting principle videography on Long Island and Brooklyn, New York visiting Starrett City Boxing Gym and interviewing many of the athletes.  “It is our hope to show and use the Jewish boxer as an example for accomplishing the American dream and proving once again that anyone can succeed in our great nation,” commented James Ford Nussbaum, Executive Producer and Director of the project.  The finished film will air on Cablevision Systems in Morris County, NJ airing in over 300,000 homes and possibly be distributed through THE JEWISH CHANNEL on cable pay-per-view.  Nussbaum went on to comment, “This is a part of Jewish and national history that many people are unaware of and it is our hopes to give viewers a behind the lens, honest rendition of what it is like to be Jewish and box in the USA.  It is our continued hope to stop antisemetic stereotypes through this film and put an end to so much of the hatred that exists right now towards Jews and other minorites.  The current economy is just fueling the fire.”  GALILEO PRODUCTIONS and James Ford Nussbaum are award winning documentarians noted for winning numerous citations including the Telly Award, Aurora Award, The Davey Award and The Communicator Awards for best overall production in many catagories.  Cablevision airs exclusive GALILEO PRODUCTIONS programming every Sunday at 12:30PM on channel 21.
For more information contact GALILEO PRODUCTIONS, LLC-973-328-1163.
www.impactthefilm.com
www.galileoproductions.com
http://vimeo.com/36591464
http://vimeo.com/36895359
www.galileo-productions.blogspot.com
Posted by James Ford Nussbaum at 10:54 PM No comments: 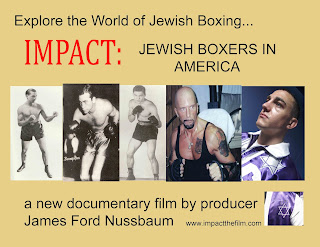 Donate what you can at KICKSTARTER:   http://www.kickstarter.com/projects/647094873/impact-jewish-boxers-in-america-0?ref=live
Posted by James Ford Nussbaum at 2:03 PM No comments:

Please donate what you can to help support our new project IMPACT-Jewish Boxers in America now open at KICKSTARTER....A small donation gets you a copy of the finished project while a larger contribution will get you sponsorship in the film.

Thanks for your support...

Please visit:  http://www.kickstarter.com/projects/647094873/impact-jewish-boxers-in-america-0?ref=live
and contribute what you can...

JN
Posted by James Ford Nussbaum at 3:38 PM No comments:

Posted by James Ford Nussbaum at 5:21 AM No comments:

So we have now shot RON LIPTON, professional boxing referee and former NY and NJ Police Officer about his love for the sport of boxing and how he trains students at Marist College in New York.  Ron sat down and discussed his passion for the sport.  According to Lipton he endured a series of horrific events that brought him to court after he had to confront over 30 men trespassing on his front lawn who had burned a cross, threatened to burn his home down and kill him along with his family.  These KKK gangs men, according to Lipton, also pulled a knife on him after crashing their truck into the side of his home...  Lipton goes on to say how he went to court over the event and won the case after his lifelong friend who he knew since 1962,  Muhammad Ali,  came to court to testify in his defense for his former sparring partner.  The two developed  a long lasting relationship.  Ron went to court in this quintessential self defense case as Muhammad Ali heard about the trial making a special trip of his own to testify for his lifelong friend and former sparring partner. Ron won the case and maintained the friendship with Ali who he's known since 1962.

Ron sat down with us and was passionate about his work in boxing and his love for the sport while reflecting about his by chance meeting with Barney Ross in the 1960's.  Ron shares these moments with us in the new GALILEO PRODUCTIONS, LLC documentary IMPACT-Jewish Boxers in America and brings lite to the meaning of what it takes to be a strong Jew in America.  Visit http://vimeo.com/36591464 and see the trailer for the film and expect some new sizzlers that will be on their way with Ron's participation and clips from the new breed of young Jewish Boxers that are rising to the top here in America.  Stay tuned....  JN
Posted by James Ford Nussbaum at 12:15 AM No comments:

I continue shooting my new film project IMPACT-Jewish Boxers in America to capture the power of the American success spirit and the American Dream through Boxing.  As I begun shooting today I learned about the loss of my esteemed colleague Justin Sturken from Geraldo Rivera's Now It Can Be Told where he met his wife Gail, married and had two wonderful children....How sad it is to have another casualty during the shooting of this important project that reflects our American Spirit and Freedoms....Justin was an inspiration to me and taught me so much along with Pete Simmons.  He went on to work at ABC News....I will miss him and never forget the times we shared together during those years...He was so bright and intellectual....Gail carries his spirit with him....This one's for you Justin....We shall never forget....All of our love and prayers.   James Ford Nussbaum 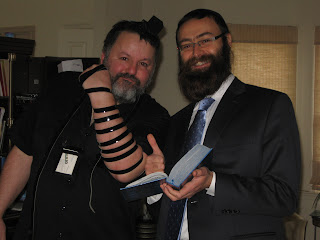 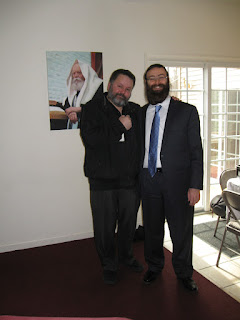 Posted by James Ford Nussbaum at 12:08 PM No comments:

So I've been able to take a moment of time out of Dmitry Salita's schedule and spend the afternoon with him at his Brooklyn training gym at Starrett City Boxing Club.  What a treat.  Although relgion, which is a significant part of Salita's training regiment has helped him focus his talents in the ring, I've discovered that it has not become an obsession.  This was a relief to learn and hear from this champion boxer and although Judiaism is a big part of his life, it has not become a total obsession.  I approached Holly Near, the singer songwriter activist to see about using her song "I Ain't Afraid"...I Ain't Afraid of your Yahwu, I ain't afraid of your Jesus, I ain't afraid of your Allah, I'm afraid of what you do in the name of your G-d."  These concerns I addressed with the athlete and was happy to learn that his intentions are sincerely honorable.  Salita is an articulate gentleman and continues to wear his crown well. 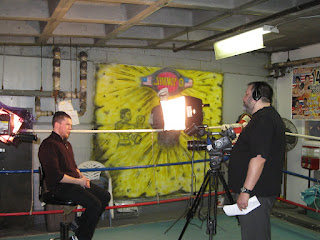 We'll soon be spending time with "FORMER BOXER AND STILL professional BOXING referee", Ron Lipton who lives in New York State, getting a chance to see him in action within the classroom and the gym.  According to Lipton he was victim of several horrific anti-semetic occurences during his years on the NY and NJ Police forces. He'll share these stories on camera.  Ron continues his boxing work as a trainer for others, both young and old.  http://ronliptononline.com/

The Cletis Seldin fight was quick and now Seldin continues his winning streak while sharing some of his personel experiences on camera.  We're getting there and a special thank you goes out to my assistants from the King Family in Caroga Lake, New York.  Having such great help from both Chip and Robert King was invaluable.  Thank you guys.  More to come soon.
JN
Posted by James Ford Nussbaum at 10:13 PM No comments:

Posted by James Ford Nussbaum at 12:24 AM No comments: 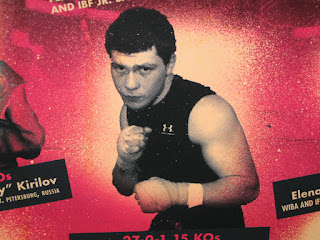 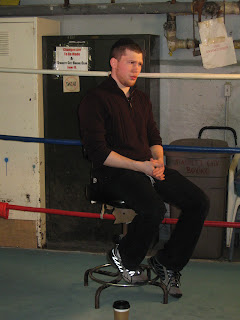 So I spent the day with Dmitry Salita and an evening of fighting havoc with Cletus Seldin, both great Jewish Boxers that have contributed a tremendous amount of themselves to the sport of boxing and their faith.  Both boxers have strong ties to their heritage and are powerhouses.  I spent the day with Salita talking about what motivates him and how he plans to lead his life for the next years.  He's passionate about the sport of boxing and Seldin is a local Long Island boy who's doing wonders in the ring with currently a 6-0 record.  But it is Salita who has conquered incredible obstacles escaping from Russia and anti-semitism to arrive and flourish here in the USA.  Both boxers bring a new excitement to the sport which hasn't been seen in many years and rely heavily on their faith to help them focus their committment in the ring leading them both down a success path that has been fruitful all of the way.  Stay tuned for more of their stories in my new film IMPACT-Jewish Boxers in America, coming to Cablevision and The Jewish Channel.
Posted by James Ford Nussbaum at 6:38 PM No comments:

So excited to meet the great Jewish Boxer Dmitry Salita later today to discuss his heritage and quest to achieve the American Dream...This will be a real treat and I'll be traveling over to Brooklyn soon.  This once again is an example of how anyone can make it in the USA no matter what your background is and that we have the freedom to achieve anything here.  Dmitry will be just one of the upcoming Jewish Boxers we will be profiling in the new film IMPACT-Jewish Boxers in America... Please show your support for this project by donating what you can on KICKSTART http://www.kickstarter.com/projects/647094873/impact-jewish-boxers-in-america?ref=live and show the world how important this project is especially as we draw closer to the elections in November where we are given the freedom to decide who will lead our country....Once again, this demonstrates how great our country really is...Please stay tuned and support us as we move forward by donating what you can...Hope to see you soon at the movies...